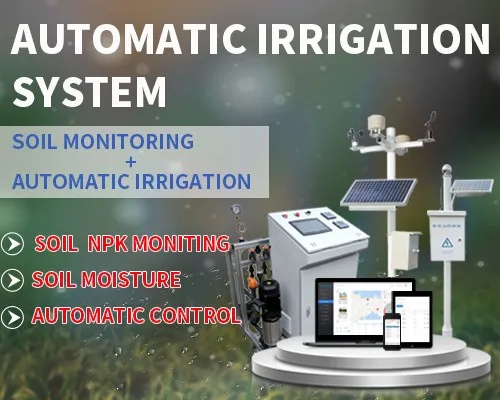 The smart garden irrigation system solution enables managers to monitor the environmental temperature, humidity, wind speed, light, soil moisture and other parameters in each area of the garden.

With the continuous expansion of municipal and corporate landscaping areas, the continuous increase of green irrigation areas and the gradual increase in requirements for fine irrigation, the realization of automation/intelligence and visualization of irrigation management has become the focus of landscaping work. Reducing garden green space irrigation labor, reducing maintenance and management costs, improving irrigation accuracy, perfecting the irrigation system, increasing water resource utilization, and changing the arbitrariness of human operations are issues that urgently need to be resolved in the current green irrigation work. Moreover, the traditional method, whether it is manual management or ordinary scheduled irrigation, will consume a lot of manpower and material resources or cause a waste of water resources. To this end, Jingxun Changtong launched a smart irrigation solution to make garden management on the "Internet of Things" express train.

Jingxuntong Smart Garden Irrigation System is divided into soil detection weather detection system, irrigation control system, and cloud data processing system according to its functions. The detection system transmits the detected data to the gateway through the communication protocol signal, and the gateway uploads the data to the cloud platform for comparative analysis and processing. When the detection data is less than or greater than the set threshold, the cloud platform will issue instructions to the terminal, and the user can also issue instructions through the client to achieve precise watering.

1. Remote irrigation: The smart garden irrigation system can remotely open and close the corresponding solenoid valve through a mobile phone or a computer.

5. Data analysis: The smart garden irrigation system automatically analyzes the data collected by sensors and weather stations, and users can perform intelligent and rational watering based on the data.

8. Zoning management of irrigation: Users of the smart garden irrigation system can set the solenoid valve controller in different zones according to the on-site pipeline water pressure, so as to realize the configuration of the rotation irrigation area and facilitate the management of the zone irrigation.

9. Video surveillance: The smart garden irrigation system deploys high-definition cameras in the green area to view the growth of green plants such as turf and flowers in real time, and adjust the irrigation strategy in real time.

1. Motor overload protection: When the motor is overloaded, the motor immediately stops rotating to suspend irrigation, and automatically resumes operation after the overload is eliminated.

2. Automatic stop on rainy days: the humidity sensor is used to detect rainy weather, and the motor is automatically stopped to suspend irrigation to prevent losses caused by over-irrigation.

4. Variable speed function: It can automatically adjust the speed of the motor according to the state of soil moisture and automatically disconnect the power supply during non-system working hours, which not only reduces the power consumption of the power-saving function system, but also prolongs the service life of the equipment.

5. Emergency stop function: When an emergency accident occurs, press the emergency stop button, the motor will immediately stop running, and the valve will close the sprinkler to stop irrigation.